SEC Guidelines on Climate Disclosures in the US

The Securities and Exchange Commission (SEC) reached a pivotal point by taking climate action and placing climate financial disclosures on its core agenda. In March 2022, SEC Chair Gary Gensler announced pervasively constructed rules that would necessitate publicly traded companies to disclose the effect of their operations on climate and their carbon emissions. Traders and investors rely heavily on the repercussions of a company’s actions on its current and future cash flow that would ultimately decide the return of their investment. Therefore, ESG metrics play a vital role in examining the impact of a company’s operations on the environment and its greenhouse gas emissions (GHG) due to their recurrent operations.

The SEC illustrated explicit standards, including the necessity of influential organisations to disclose data about how climate risks have had, or their potential to have, a material impact on business in the short and long run. Moreover, the rules would force organisations that utilise internal carbon pricing to detail how those costs are set using the carbon asset price theory and modeling.

SEC noted that the disclosure requirements would be similar, in some capacity, to those that companies provide under the existing frameworks and standards, for instance, the Financial Stability Board’s Task Force on Climate-related Financial Disclosures (TCFD) and the Greenhouse Gas Protocol. In addition to these similar disclosure points, companies would be required to disclose the impact on financial statement line items related to severe weather conditions and transition activities if the amount exceeds 1% of the related line item and the expenditure associated with mitigating the risk of such weather events. Moreover, companies would be obligated to disclose governance practices concerning how the company’s board of directors and management oversee climate-related risks, the risk management process, and the company’s response.

The latest move by SEC comes amidst claims of investors and market analysts accusing companies with the most carbon emissions in their operations of greenwashing their climate disclosures to generate investor faith in the value of current and future cash flow. The graph below shows the top 20 companies in the United States with the most carbon emissions and their percentage contribution to the total GHG emissions in the US. The magnitude of exorbitantly high emissions has prompted the SEC, not Congress, to adopt a robust climate finance action policy to ensure transparency for investors in the public markets. 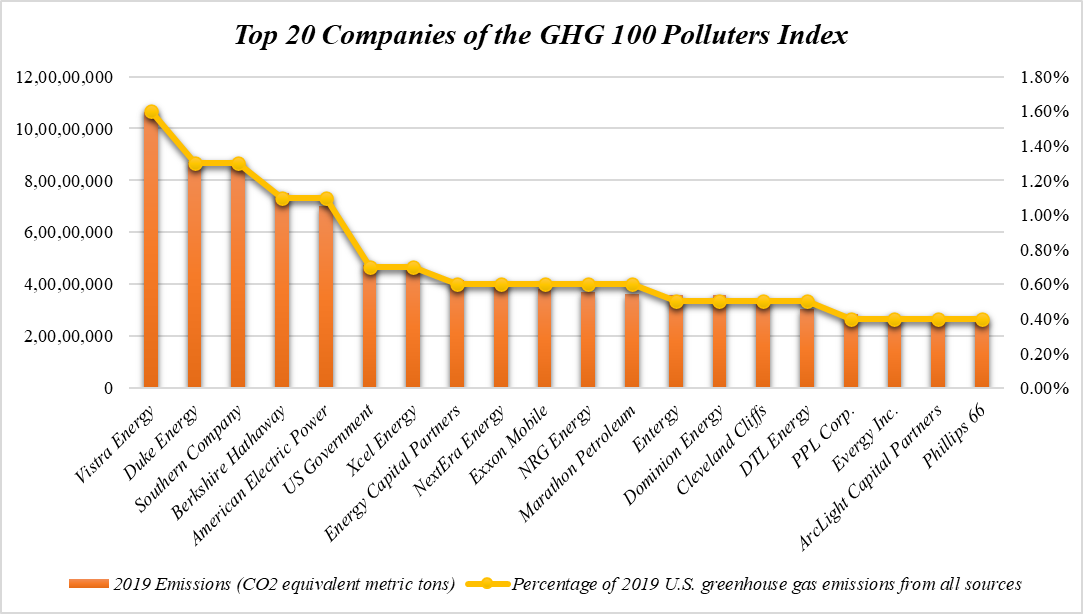 Moreover, companies with more than $700 million worth of shares on the public market would be obligated toward the aggressive filing of climate data to the SEC for the financial year 2023-24. This proposal has been complemented with a fresh set of rules rolled out by the SEC in May 2022 to induce capacity-building measures in companies over their ESG investing practices disclosures. To prevent the practice of greenwashing, companies would have to market their names as per the Names Rules. This rule establishes that companies would have to market their fund’s name as per the investment practices they follow and should have at least 80% of their assets in the class of funds they claim to be managing to the public.

Institutional investors like private equity and sovereign wealth funds need more and better information from major profitable countries in the public market. In addition, the SEC is demystifying the myth that voluntary carbon reports are sufficient for investors to gain insights into a company’s carbon footprint. Therefore, stringent climate financial disclosure requirements would enable institutional investors to build trust and debunk the practice of greenwashing in the industry.

For this, ESG analytics would play a key role in determining the cost of negative externalities, in this case, carbon emissions resulting from company operations. As per the FY2019 Fortune 500 emissions report released in 2021, Fortune 500 companies were responsible for 27% of global GHG emissions. Moreover, only half of the companies in this index voluntarily reported their GHG emissions either in whole or part due to no legally codified norms making such disclosures necessary. Furthermore, Scope 3 emissions, i.e., emissions engendering from value-chains, accounted for over 3-quarters of reported emissions in entirety.

In the latest SEC draft rule, large companies will be required to file all proposed disclosures, including GHG emissions metrics of Scope 1 (direct GHG emissions occurring from sources that are owned or controlled by the company) and Scope 2 (GHG emissions from the generation of purchased electricity consumed by a company), and associated intensity metrics, but excluding Scope 3, by the fiscal year 2023 (to be filed in 2024). The phase-in date for smaller reporting companies in the fiscal year 2025, is to be filed in 2026.

In conclusion, the SEC has planned to establish a robust and stringent mechanism in place to make it legally obligatory for companies to disclose their impact on the climate and their financial planning to mitigate the risks accrued due to their actions. Moreover, the mitigation of greenwashing through the Names rule would allow institutional investors in the public market to make an informed decision about their investments and the value of cash flow generated in the future. These rules are open for public comments until they are implemented into governance practices. Henceforth, climate finance action policy is garnering much attention in the US, which makes the pertinence of ESG analytics and data disclosure even more significant.

What is ESG Reporting and Why is it Important For Your Organization?

What makes BRSR and CSR different?

ESG: A guide for CFOs

How does BRSR align with Sustainable Development Goals?

What is Supply Chain Sustainability?

What Is the Difference Between ESG Ratings and ESG Reporting?

BRSR: From the lens of a Company Secretary

Into ESG: Choose the right ESG Reporting Standard for Your Company

A Deep Dive into the scopes 1, 2 and 3 of Carbon Emissions

ESG: A guide for CMOs

ESG Reporting in Canada: Here is What You Need to Know

SEC Guidelines on Climate Disclosures in the US

What is the Science-Based Target initiative (SBTi)

How can VCs evaluate the ESG of their portfolio companies?

How to maintain the right balance between shareholder value creation and sustainability?

Best Software for BRSR Reporting: Everything You Need to Know

Why is it a risky strategy to approach ESG reporting purely from a compliance standpoint?

A Beginners Guide to Developing ESG Strategy for your Company

How Can ESG Data Help Fight the Climate Crisis?